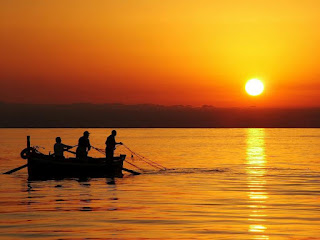 My first real attempt at telling a stranger about Jesus Christ was terrifying. It was the first week of my freshman year of college. Newly arrived from my rural home in Western Colorado, I was still getting a feel for the big city and a big campus.

The day I arrived in Denver, I called my mom from a phone booth near my dorm to tell her I got in safely. As I hung up, I noticed a small poster taped in the booth. Underneath a profile sketch of Christ were the words, “Wanted: Jesus Christ,” and a phone number. I called the number, found out there was an active Christian fellowship at the University of Denver, and said I was interested.

Within a couple days the campus minister, a tall man in his 30's, met me in the lounge of my dorm. After very little chit-chat, just enough to ascertain that I was a new Christian, he suddenly stood up, motioned me to follow, and said, “Hey, come over here and share your testimony with the Jehovah Witness janitor I just met!”

I don’t know remember what incoherency tumbled out of my mouth, but I’d hate to think the poor janitor’s eternal destiny depended on it.


Thankfully, Jesus is still calling people to Himself, and for whatever reason, He even uses the stammering words of people like you and me.

And Jesus said to them, “Follow Me, and I will make you become fishers of men.” Immediately they left their nets and followed Him. Mark 1:17,18 NASB

I suppose a lot of men throughout history have been able to persuade people to follow them. Like Hitler or Castro or Mao. But Jesus was able not only to command their attention and obedience, but also to transform them. They became fishers of men, as He promised.

The snapshot of those two brothers on the shore of a lake in the Middle East is a picture of the first ripple that became a tsunami. In this gentle and unpretentious way, Jesus called the first man-fishers. Nothing has ever been the same. The ripples still wash over this planet. They caught and carried me along over 40 years ago.

I admire Christ because He does just what He says He will do. “I will make you become fishers of men.”
Posted by Jim Carpenter at 10:13 PM