I like to read. I say that upfront, and I know that automatically makes some of you say, Not me!

Okay, I understand. But hear me out. Reading is still a good thing even if you don’t do it very often. Books put you in touch with other worlds, new ideas, stretch your imagination, and help you live more effectively.*
Read more »
Posted by Jim Carpenter at 7:27 PM

We live in crazy times. Being “offended” or “triggered” by someone’s tee shirt or use of gender pronouns is now called micro-aggression. Saying the wrong thing or holding the wrong opinion could get you kicked out of college. You might even get arrested.

I think some of the blame goes to well-meaning child rearing where we tell every kid that she is special and that she deserves to have whatever her heart desires. Every child gets a trophy just for showing up. Because we’re all special.

Anyhow, I was thinking about all of that this past week as my wife and I listened to an audio presentation of C. S. Lewis’ The Horse and His Boy. It’s a tale of a slave boy who runs away “to Narnia and the North.” And one of his companions is Bree, a talking horse who was born in Narnia, but was captured and enslaved while still a foal. Though Bree has had a career as a war horse, he never revealed to his masters that he was a free-born Narnian who could talk.
Read more »
Posted by Jim Carpenter at 8:14 PM

Email ThisBlogThis!Share to TwitterShare to FacebookShare to Pinterest
Labels: being special, C. S. Lewis, Narnia, The Horse and His Boy 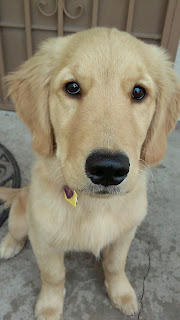 In August we got a new golden retriever puppy. We named her Mercy, which is what we’ve been asking God for ever since.

Anyway, I’ve been a dog owner all my life, but I’m always open to learn new things. Like yesterday when I decided to trim Mercy’s toenails. My experience taught me some important lessons that I want to pass on as a public service.
Read more »
Posted by Jim Carpenter at 7:52 PM

This is the story of a cultured, well-educated man who became a terrorist…and then became something else.

He was born into a prominent family. Like bin Laden and al-Zawahiri, his roots were upper-middle class, refined, and privileged. As a child he was very bright, and so his parents arranged for him to study under the best teachers. He spoke several languages and had a knack for moving easily from one culture to another.

Along with his education came an increased interest in his ancestral religion. He became more and more devoted. You might even say he was becoming radicalized.
Read more »
Posted by Jim Carpenter at 1:31 PM

Freed From A Curse

In fairy tales, evil witches put people under a curse. Think Sleeping Beauty or Snow White. But the Bible speaks plainly of a curse that cannot be undone by Prince Charming.

The Greek word “accursed” is anathema - delivered over to divine wrath. Anyone who distorts the gospel of Christ is under a curse. From whom? From Almighty God.

Sounds a little harsh, doesn’t it?