Where Do You Find Buried Treasure? 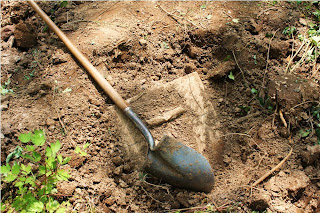 In the 1994 movie The Shawshank Redemption, a banker named Andy Dufreyne spends nearly two decades in Shawshank State Prison for murders he did not commit. After years of painstaking planning and effort, he tunnels out of his cell, escapes through the prison sewer system, and heads to Mexico with a fortune he has embezzled from the corrupt prison warden.

One of my favorite scenes in the movie comes near the end when Red, Andy’s best friend in the prison, is finally paroled after 40 years of incarceration. Before he escaped, Andy gave Red specific instructions about how to reconnect with him after Red got out. Go to a certain farm outside the town of Buxton, Maine. Look for a field with a big oak tree at the end of a stone wall. Find a large volcanic rock that seems out of place, and look under it.

Red hitchhikes and walks for hours until he finds the farm, the field, the tree, and the rock. And buried under the rock was a metal box Andy left for him, with money and directions on how to find him in Mexico. The final scene of the movie shows the two friends reunited in freedom.

Imagine if Andy Dufreyne had told Red, When you’re paroled, just go to any town and find any farm. And look under any tree, in any field, and there, under whatever rock you choose (it doesn’t matter which one), you’ll find the treasure that will set you free.

Nobody would believe a story like that. Not only is it lousy fiction, but it’s not real life. Buried treasures are not found in every town under every tree in every field under every rock.

But while no one would believe a story like that, many people believe a version of “every tree has a treasure under it” when it comes to the ultimate story about God, forgiveness, and eternal life.

When I was a young man someone told me, “it doesn’t matter what road you’re on. They all lead to God. Just pick one and stay on it.” Why would anyone with any real life experience think this is true? It's worse than lousy fiction. It's a terrible, devastating lie when heaven and hell are in the balance. The Bible tells a different story. It says true treasure is only found in one place.

The Bible teaches that there is treasure, riches and blessing for this life and the next. But it is not found on every spiritual path, in every religious field. It is found in only one place. And there is salvation in no one else, for there is no other name under heaven given among men by which we must be saved. Acts 4:12

The treasure is Christ, only Christ, in whom are hidden all the treasures of wisdom and knowledge. Colossians 2:3.


The kingdom of heaven is like treasure hidden in a field, which a man found and covered up. Then in his joy he goes and sells all that he has and buys that field. Matthew 13:44
Posted by Jim Carpenter at 9:22 PM