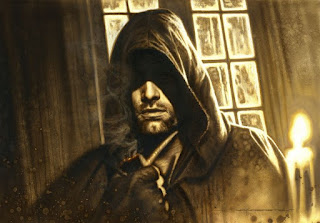 In the first book of J. R. R. Tolkien’s trilogy The Lord of the Rings, you meet Strider, a dark, grim, hooded man who is identified as a “ranger.” You can’t tell whether he is good or bad, but he is definitely an intriguing and dangerous character. By the end of the last book, you know he is Aragorn II, heir to the throne, and you get to see him crowned the king.

First impressions don’t always pan out. What will the person you admire from a distance be like when you get closer? Two scenarios are possible.

The first is that “familiarity breeds contempt.” The closer you get, the more you discover things that shatter your initial attraction. The handsome and confident suitor turns out to be an unemployed narcissist with a history of denigrating women. Or you discover that the witty, engaging professor is actually very shallow, relies on old research, and hasn’t had an original thought in decades.

The second scenario is much happier, and very rare. You find the person you admire is far nobler and more praiseworthy the closer you get. The handsome and confident suitor turns out to be the crown prince of a small country who rules with wisdom and kindness. The professor is working on a new book and invites you to be her research assistant.

Okay, you get the point. With Jesus, it is the second scenario, but much more.


You see a perfect little baby in a manger. He seems vulnerable in every way, especially given the intent of the Roman governor to destroy Him. But you discover that one day He will judge the nations. When the Son of Man comes in his glory, and all the angels with him, then he will sit on his glorious throne. Before him will be gathered all the nations, and he will separate people one from another as a shepherd separates the sheep from the goats. Matthew 25:31, 32

You admire the wedding guest who, somewhat reluctantly, turns water into wine. Then you discover Him to be a miracle worker who has power over nature, disease, demons, and even death itself. And then you find out He is the Creator of everything, and so every molecule of the universe must do His bidding. All things were made through him, and without him was not any thing made that was made. John 1:3

You like the compassionate teacher who speaks with such authority and yet with absolutely no pride or condescension. But then you discover that He not only knows the word of God, but that He is the living Word of God. And the Word became flesh and dwelt among us, and we have seen his glory, glory as of the only Son from the Father, full of grace and truth. John 1:14

You see a Man staggering, bloody and beaten, beneath a heavy cross, and your heart goes out to Him. He has been tortured almost to death; how can He possibly hold up this burden? Then you learn that now He holds up everything – the entire universe. In him all things hold together. Colossians 1:17b

You see the Friday afternoon martyr, a gory, mistreated corpse, and your heart breaks. But on Sunday morning He is the Resurrected King, radiating infinite life, power and glory. And you learn that His death bought the ransom of all God's elect, and His resurrection sealed the deal. Worthy are you to take the scroll and to open its seals, for you were slain, and by your blood you ransomed people for God from every tribe and language and people and nation, and you have made them a kingdom and priests to our God, and they shall reign on the earth. Revelation 5:9, 10

The handsome prince may be a fairy tale, but Jesus Christ, the King of all Kings, is not. Admire Him at a distance. Up close, you will love, worship, and follow Him.
Posted by Jim Carpenter at 8:19 PM