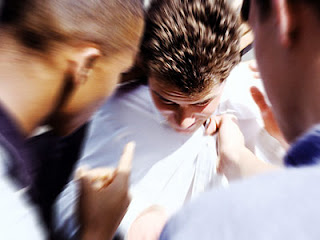 The gym of our old high school was a floor down from the primary classroom building. Two sets of stairs opened from the main hall down to the small gymnasium.

One morning after P.E., I was walking up those stairs, heading to my next class. To my dismay I encountered a group of upperclassmen, my sometime tormentors, who were walking down the stairs. “Hey, Carp,” one of them taunted, slugging me hard on my left shoulder. Without thinking, I slugged him back.

Which triggered the rest of them, five or six guys, to begin cursing me and hammering the same spot on my deltoid muscle. That pummeling pretty much summarizes my 9th grade.

Lots of people have terrible, scarring memories of bullying. I never experienced the bad stuff. No “swirlies” in the restroom, no really damaging physical violence. My early high school years were not a living hell. A living heck, maybe.

But because I was not a jock, but a “brain,” a nerd, I experienced my share of contempt, ostracism, and various attempts, often successful, to humiliate me.


Christ knew about bullies. Consider him who endured from sinners such hostility against himself, so that you may not grow weary or fainthearted (Hebrews 12:3).

Bullies usually pick on the younger, the smaller, the weaker. But in Jesus’ case the bullies of the Jewish religious establishment and the bullies of the Roman government picked on Someone who was:
·        Older. Christ is timeless, ageless, eternal.
·        Bigger. He is so “big,” He is omnipresent: “Do I not fill heaven and earth?” declares the Lord, Jer. 23:24.
·        And stronger. Our Lord is infinitely powerful, beyond imagining.

So when He was “bullied,” He let it happen. He lay down His life (Jn. 10:18). C.S. Lewis’ mighty lion Aslan, submitting to the infernal hordes of the White Witch, comes to mind.

When you and I were bullied, the truth is that we were no better than our tormentors. Not really. We might have switched places if we had had the opportunity.

But Jesus was bullied by people not fit to untie His sandals.

The image of our Savior being flayed, while the soldiers hooted and cursed, humbles us. And when we think of Him smeared with spit and blood, we know He understands the injustices we face.  But even more, these horrific memories of His pain swell our hearts in love for Him and give us endurance. “Consider Him …so that you may not grow weary or fainthearted.”
Posted by Jim Carpenter at 7:53 PM