The Surprise Guest at the Funeral 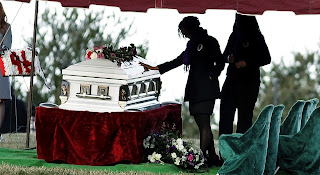 Recently I had lunch with a pastoral colleague, and we started swapping funeral stories. Macabre? Maybe, but there are some pretty unusual things that happen at funerals. For example…

I was doing a graveside service for a lady in our church. Her casket was perched on one of those portable stands the funeral home provides. This one was on rollers. And the grave was on a hillside. I bet you can see what’s coming. I had just started into my remarks when the casket started moving. Downhill, of course. I blocked it with my body, and some of the other funeral staff jumped in. Disaster averted. But the lady’s daughter thought it was funny – “Mom was headed for the ocean,” she remarked.

A pastor friend of mine told me about a funeral he did for a member of a biker gang. His was the only suit in a room full of large, hairy, tattooed men wearing filthy jeans and leathers. When my friend mentioned the name Jesus, the guys all gave him a middle-finger salute which continued till the end of his devotional. Good times.

But by far the most wonderful surprise I’ve ever experienced happened just a few years ago. For several years two middle-aged ladies from back East would worship at our church a couple times a year. They explained to me that they came to our town to visit an elderly aunt (I’ll call her “Mabel”) who lived in a nursing home in our community. Both ladies loved their aunt, and wished they could see her more often. They were especially concerned about her spiritual state, and had tried to share the gospel with her, with no success. They asked if I could arrange for someone to visit her.

The next week my wife went to see Mabel, and had a pleasant visit, but try as she might, Mabel resisted any spiritual conversation at all.

Months passed, and I got a call from one of the nieces to say that Aunt Mabel had passed away and they would appreciate it if I could do her funeral. Of course I agreed. The ladies were flying in that week, and we set an appointment to go over the details of the funeral.

When they arrived we agreed on a couple hymns, reviewed the obituary, and put together a simple order of service. When I asked about Mabel’s spiritual condition they were very pessimistic about any change. As far as they knew, their aunt died without Christ. I explained that I could not bring a message of “now she’s in a better place,” when we simply did not know. I promised to preach the gospel for the sake of those attending the funeral. They understood.

The day of Mabel’s funeral, I was set for one of those solemn services where you try to comfort the grieving, commend the departed to God’s mercy, and extend God’s grace to those who may not know Christ. I walked into the funeral home where 40 or 50 of Mabel’s relatives and friends were gathered. They were mostly middle-aged and older white people. One African-American lady stood out in the small crowd.

One of the nieces rushed over to welcome me. “I want to introduce you to someone,” she said with considerable excitement. I followed her to the front where she got the attention of the black lady. “Pastor Jim, this is Deloris, whom I just met this morning. Deloris took care of Mabel for the last couple years. This morning she shared with me some wonderful news.”

Deloris and I shook hands, and she proceeded to tell me that she had come to know and love Mabel over the years. Somehow she seemed to know that Mabel’s time was drawing to a close. The day before she passed away, Deloris came to her room, shut the door, and put up the do not disturb sign. “Now Mabel, you know you need to accept Jesus, and I’m here to help you.”

Mabel listened to her friend, heard and believed the gospel, and put her trust in Christ the day before she died.

My message that day was a little different than I had planned. I spoke about how happy we were to know that Mabel was in heaven, and how grateful we are for the way God uses people like Deloris to help us get there. With joy I preached the gospel.

“All that the Father gives to me will come to me, and whoever comes to Me I will never cast out.” (John 6:37.

Posted by Jim Carpenter at 6:01 PM