THE GRATITUDE OF A NON-SUPERSTAR 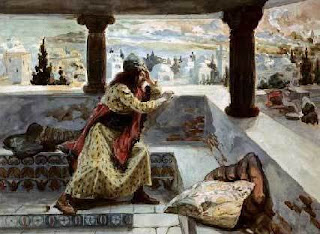 It happened, late one afternoon, when David arose from his couch and was walking on the roof of the kings's house... (2 Samuel 11:2)

In the last couple weeks we’ve learned of an evangelical superstar who has left his church, his marriage and his faith. The twist on this story is that he penned a popular book about courting instead of dating that influenced a lot of Christians as the Scriptural blueprint for starting a godly marriage. Now, in the middle of divorce and apostasy, he has apologized for that book.

Right after that story broke I read about another very popular pastor whom I admired for his unashamed Reformed faith and bold preaching. One of my sons listened to his sermons online and found him a great role model. The church’s elders confronted the pastor about reports that he had broken his marriage vows. He admitted two affairs and resigned from the ministry.

Those stories also brought to mind the uncomfortable retirement of another superstar whose impact on contemporary American Christianity has been profound. Instead of a joyous retirement and smooth transition to his handpicked successors, he was accused by a number of women of inappropriate contact. The sordid details were splashed all over a major newspaper in the city where his megachurch is located. Not only was his own legacy tarnished and the huge church he built rocked to its core, but his entire elder board and his designated successors all resigned, too.

Tragically, those are not the only stories of big name Christian leaders who did not finish well. Like me, I bet you could think of others who ended their public ministries in disgrace.

As a pastor I’ve been mulling this over for a long time. Are these men any different than me? Could I fall from faithfulness in such an ugly fashion?

Well, I know my own soul too well. I drag an old sin nature around just as these men do, and I struggle to mortify the flesh and to walk in the Spirit like they must have.

Without giving them a pass or an excuse, I come away simply grateful for the “non super-star” life I’ve lived. When I was a young pastor I hoped that I might have a much wider influence than I’ve had. (Although I don’t believe any of us will know the meaning and impact of our lives this side of eternity.)

But now, decades later, I find myself very grateful for the privilege of serving Christ and for the dear people He has given me to shepherd. I ask myself, If I had multiple thousands of people hanging on every word I spoke, telling me how great I was, would I resist the temptation to pride? If the church I pastored was so large that I became wealthy, would that undermine my family’s dependence upon the Lord? If my personal holiness was under a much greater assault by the enemy, how would I fare? If multiplied influence and recognition made my personal accountability more optional, would I fall?

I’m no better than the men I mentioned, the ones who fell from a great height. By God’s grace He has given me the life and the influence He wanted for me, and though being faithful is a spiritual battle, I wouldn’t trade places with the superstars. Of course I have my own race to run, and pride, lust, and sloth are possible for me right where I am. But I thank the Lord that I do not have to deal with the unique temptations and pressures of superstardom.

King David sat on a rooftop, the absolute ruler of all he surveyed. He could do whatever he wanted, with whomever he wanted, including with the beautiful woman he watched taking a bath next door. Most men were at work. His army was deployed. But the superstar’s accomplishments and privileges put him in a position of temptation that the average man in his kingdom would never have occupied.

I’m glad I’m not on that rooftop.
Posted by Jim Carpenter at 2:04 PM