The Most Unusual Wedding I Never Performed 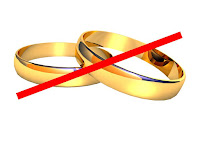 When I was a young pastor I naively thought that the couples who asked me to officiate at their weddings would be mainly young, godly people who were raised in the church and who grew up attending Awana and the youth group. I figured they would be starry-eyed virgins with Scriptural values and godly examples from their own intact families of origin.

I learned pretty quickly that performing a wedding as a Christian pastor is complicated, and that people’s lives are often very broken. Sometimes it’s hard to know how to do the right thing. Especially if you care more about pleasing God than about pleasing people.

Rob and Rachel (not their real names) were an attractive couple in their early 30’s who began attending our church a few years ago. He had worked for a Christian non-profit agency in another state, and she was a personal trainer at a local gym.


They had just relocated to our area and seemed to fit in well with our congregation. They became part of a small group I led, and were making friends with folks in our church.

They told me they were engaged and wanted to talk with me about performing their wedding. In my first meeting with them, I began to go through a standard information sheet to get to know them. They both claimed faith in Christ, both had parents still married to one another, and both had a track record of faithful church attendance.

Then I came to the part in the questionnaire which asks if either of them had been married before. There was a short silence, and then Rachel said she was divorced. Okay, I said. Tell me a little about that marriage and why it ended. She told me her ex-husband (I’ll call him Don) was a Christian, but that they were incompatible, and she just didn’t love him anymore. So who filed for divorce? I asked. Rachel said she had.

Rachel, was Don unfaithful to you? No, Rachel said. Did he abandon you, like he didn’t want to be married any longer? No.

My casual and friendly interview with Rob and Rachel had suddenly become tense. I shared my convictions about marriage, divorce, and remarriage. My view is that marriage is sacred to God and is meant to be a life-long commitment (Matthew 19:6; Genesis 2:24). God hates divorce (Malachi 2:16), and permits it only under two circumstances: when one spouse has been repeatedly unfaithful (Matthew 19:9), or when one spouse has permanently deserted the marriage (1 Corinthians 7:15).  In those circumstances, I believe God permits divorce, as well as remarriage.

At this point Rob added something to our conversation: he said Rachel had not been a Christian when she was married to Don, and therefore her divorce was part of her old life, now cleansed by the blood of Jesus. I was confused because I thought I had heard Rachel say she and Don were both Christians when they married. When I asked for clarification, Rachel didn’t have a clear answer. The only thing I knew for sure was that she had left her Christian husband and filed for divorce, and her only reasons were “falling out of love” and incompatibility.

Honestly, I wanted to avoid having to tell them that I couldn’t marry them. I knew that would make them extremely unhappy, probably angry toward me, and would undoubtedly cause them to leave our church. Plus I suspected some of their new friends in the church would not understand. I decided that I would take an overnight prayer retreat in the hope that, with prayer and reflection, I might find a way to accommodate Rob and Rachel’s desire to marry and still keep me within Scripture guidelines.

So I told them we would continue our meeting in another week, and in the meantime I would go away for a prayer retreat to seek God’s guidance. They left my office, seemingly a little relieved that I hadn’t told them no outright, but still shaken by my questions.

During my prayer retreat I didn’t discover anything new from the Scripture. God still considered marriage a permanent, lifelong covenant, He still hated divorce, and He still seemed to permit divorce in only the two circumstances: persistent unfaithfulness and permanent abandonment.

I kept coming back to 1 Corinthians 7:10-11:To the married I give this charge (not I, but the Lord): the wife should not separate from her husband (but if she does, she should remain unmarried or else be reconciled to her husband), and the husband should not divorce his wife.

I thought to myself, these verses speak directly to this situation: Rachel shouldn’t have separated from Don, but since she did, God says she should remained unmarried or reconcile with him. But I was still looking for a loophole: what if Don has remarried? What if he is sick of Rachel and has moved on? It seemed like a long-shot, but I decided to contact Don.

My next meeting with Rob and Rachel was fairly short. I explained that everything in Scripture that I read seemed to point to their proposed marriage not being God’s plan for them. I had printed out all the passages I had studied, and read over the verses with them. Then I asked if Rachel would be okay with my phoning Don. Surprisingly she was, and quickly gave me his phone number.

We said goodbye, and planned to meet again the next week. I immediately called Don and to my surprise he answered. Gulping a bit, I told him who I was and explained that Rachel, his ex-wife, was asking me to perform the wedding for her and her fiancé. Don, have you remarried? No, he said. Well, how do you feel about Rachel? Would you take her back? He said, emphatically, that he still loved her and would take her back in a heartbeat!

Well, my final meeting with Rob and Rachel was just as hard as I expected. I told them what I should have said two weeks before: that I could not perform their wedding because I did not believe Rachel’s divorce was Scriptural. I urged them to reconsider marrying and told them that I didn’t believe God would bless a marriage begun in disobedience. Then I repeated what Don had told me – that he still loved Rachel and wanted her back.

Rachel cried, Rob was angry, and they left quickly. Not just my office, but our small group and our church. Within a short time they found someone who would marry them. And, as I expected, some of their friends within our church expressed their disapproval of my actions.

Would you (or your pastor) have handled it differently? As I look back, my only regret is dragging out what was a foregone conclusion: I could not marry them and remain true to my understanding of the Scriptures. Still I wonder: did I accomplish anything? They still got married, and they are, presumably, serving and supporting another local church.

In the end I have concluded it is not my job to worry about outcomes. I must be faithful to the God who has called me by following the Bible as closely as I am able. Sometimes people will be unhappy, even angry, as a result. But just as we have been approved by God to be entrusted with the gospel, so we speak, not to please man, but to please God who tests our hearts. (1 Thessalonians 2:4)  I may never see Rob or Rachel again, but I report to my Lord every day.

Posted by Jim Carpenter at 5:28 PM