The Powerful Kindness of Jesus 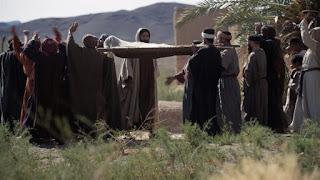 The Gospel stories show us Jesus in His humanity, and allow us to walk closer to Him,  and to know Him in smaller, deeper and more intimate ways. Like the lovely story of Jesus and the widow of Nain:


Soon afterwards he went to a town called Nain, and his disciples and a great crowd went with him. As he drew near to the gate of the town, behold, a man who had died was being carried out, the only son of his mother, and she was a widow, and a considerable crowd from the town was with her. And when the Lord saw her, he had compassion on her and said to her, “Do not weep.” Then he came up and touched the bier, and the bearers stood still. And he said, “Young man, I say to you, arise.” And the dead man sat up and began to speak, and Jesus gave him to his mother. (Luke 7:11-15)

Why this insignificant town?
Nain was a small, backwater place, mentioned only here in Scripture. Nobody went there to shop or for vacation. So why did Jesus? He had been in Capernaum (vv. 1-10), over 20 miles to Nain – a good day’s walk. Why Nain?

Jesus arrived at this precise moment because He had a divine appointment with a poor, grieving widow who had just lost her son. Just as He came to Jacob’s well to meet with the Samaritan woman, and just as His journey through Jericho included a long lunch with a little man named Zacchaeus.

Jesus doesn’t do random. Before the foundation of the world these broken people were part of His incarnational agenda. I bet you are, too.

His heart
The young man’s death was a devastating blow to his widowed mother. Without any other support system, she would be reduced to begging. Her son had just died that day – a dead body wouldn’t be kept any longer from the grave – and she was overcome with grief and the certainty that she would never recover from this loss. Then Jesus appeared. And when the Lord saw her, he had compassion on her and said to her, “Do not weep.”

What would you like to know about the Savior? Because here in this small moment, we see His heart. “Compassion” speaks of deep emotion, the heart’s reaction to someone else’s pain. Like “it felt like a kick in the gut,” or “the breath went right out of me,” or “my heart was broken.”

Jesus Christ, Maker of the world, Upholder of the universe, Redeemer of all God’s people and of His fallen creation, was deeply moved by the pain of one lonely widow whose name we do not know. Look how kindly He spoke to her, “Do not weep.” I imagine Him speaking it softly to her, with the tenderness with which He would one day address His own mother from the cross.

His powerful word
Often when we feel someone else’s pain, we also feel the frustration of not being able to help, as much as we might want to. Not so our Lord. Then he came up and touched the bier, and the bearers stood still. Luke is giving us a clue. Anytime the Greek verb “came up,” (approached, came near) is used of Jesus in the Gospels, it means He is about to exercise His power and authority. Get ready.

The pall bearers seemed to know. Jesus put His hand on the stretcher carrying the young man’s body, and everything became really quiet. Jesus didn’t care that, according to the ceremonial law, touching a dead body (or anything that body had touched) rendered a person unclean. Jesus is holy, holy, holy. And he said, “Young man, I say to you, arise.” And the dead man sat up and began to speak, and Jesus gave him to his mother.

As He spoke to Jairus’ daughter – Little girl, I say to you, arise – and to His old friend Lazarus – Lazarus, come forth – so Jesus spoke life into this young man. And of course the dead man sat up and began to speak. But, alongside the omnipotent word is the tender heart – and Jesus gave him to his mother. “Here, Mom, here’s your boy. Everything is going to be okay now.”

Jesus - coming near
Maybe you’re in some lonely, backwater of a place. Maybe you’re torn by grief or buried deep beneath wrong choices and you’ve just about given up. There's hope - Jesus still comes near. Expect His powerful kindness.

Posted by Jim Carpenter at 6:41 PM